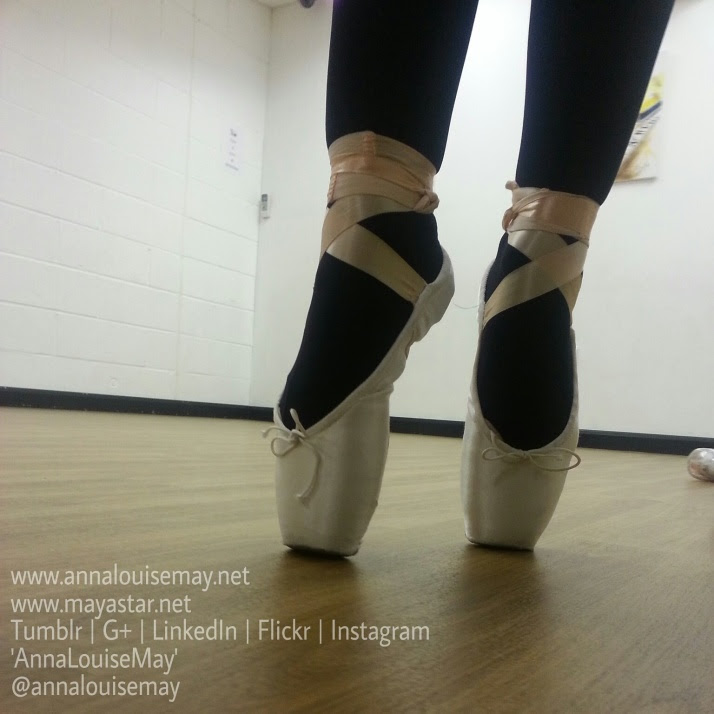 ​This was a really hard pic to take! My #pointe shoes (#ballet #balletshoes #bunhead).

Grishko Novas with bloche elasticated ribbons (the cord not tied off & hidden meaning these were new – I only tied the cord once I had softened them after a few hours of dancing in them). #Grishkos are often considered a professional shoe because the shank (the bit that supports your foot in the sole) is v v flexible and is more like a 3 quarter shank than a full one so it wouldn’t be good if you had weak feet.

But I had been dancing ballet for years and before that I was a “toe walker”. It’s not uncommon in people with high functioning autism – it’s a stage of physical development we sometimes bypass because we’re developing bigger brains! So all my life I walked on the balls of my feet kind of rolling my foot in from the side – my heel never touching the floor. It looked like a normal walk to anyone else. Some people said in a hurry I tended to march rather than run. And I seemed prone to breaking into a skip instead of a run actually!

I was really frustrated because my Novas would look fine until I broke them in. Then they looked twisted as if I was sickling and I couldn’t work out why. They felt good and my technique improved and my feet got stronger and stronger but this only seemed to make the shoe twist more. I tried all kinds of ways of using my ribbons to hold the shoe to my foot and checked I got over the box (it doesn’t look like it in this pic but I am bending over to take the photo and the box of the front shoe has raised a bit).

In the end I took a private class with an examiner and explained to her the problems…my hamstrings were v tight from years of toe walking so I focused a lot of my barre on stretching them etc. As soon as I took off my soft shoes to put my pointes and extended my foot she identified the problem – I have #hypermobility in the joints in my foot. Another physiological #aspergers characteristic. In fact I have hypermobility in most of my joints.

So the solution? Very simple – lightly bandage the “knuckles” area of my toe joints before I put my shoes on.

It extended the life of my shoes by at least 3 times!

Note – part of the problem is that I have long toes, 2nd toe longer than the big toe, very low profile and very narrow heel. No other shoes except Grishko’s would fit my heel (and because the cord stretched a little I needed to let it stretch a bit before tying it off or they would slip off my heel). And seriously, I tried every brand and had fittings all over London before finding Grishko shoes…first the  2007s and then at Grishko’s recommendation, the Nova which has a wider platform and worked better for the bandages and gel spacers I used to keep from breaking my second toe! Because the ones in the pic are new you can see my foot was sitting very high in the shoe! That would resolve within 15 or 20 mins dancing – I wasn’t a fan of crushing the box to speed it up because sometimes I only got 6 hours dance time out of them!

This problem wasn’t picked up by my dance teacher…nor any fitters…so if you are having problems getting fitted, try seeing an ex dancer or examiner because I am not the only one out there with this problem. Also bandaging protects my joints from abrasions! But take care not to bandage too tightly at first because you won’t get over the box!

from WordPress http://ift.tt/2dhuzzZ
via IFTTT
Posted by Unknown at 10:26